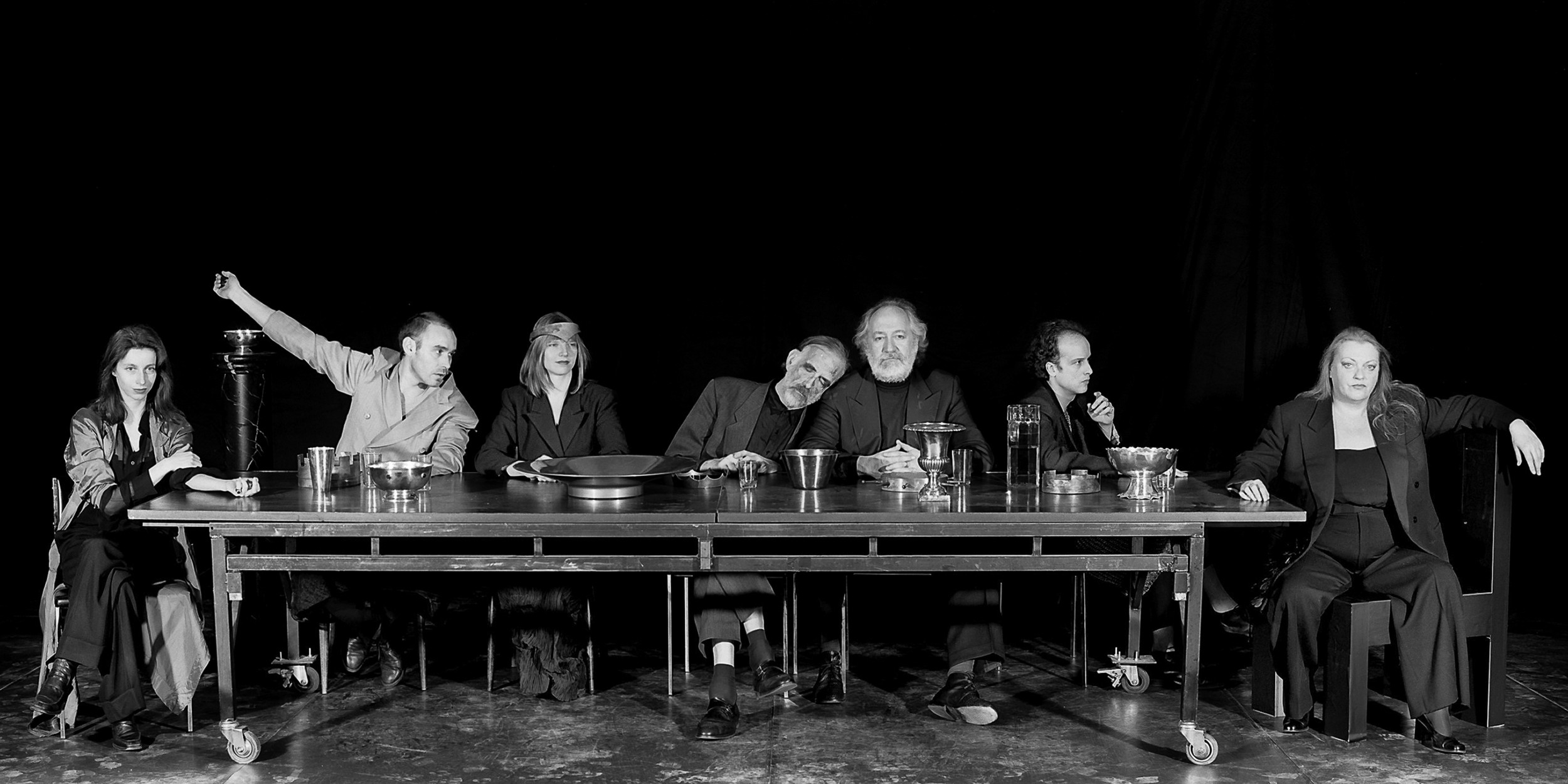 Needcompany is a Cultural Ambassador of Flanders.

Jan Lauwers once again took on the work of an old love of his with Needcompany's Macbeth. Those familiar with his two previous versions of Shakespeare plays knew that they could expect something with a character of its own.

It was in 1990 that he first caused a stir with his remarkable Julius Caesar. He cut the text drastically and limited the cast to seven actors. The set consisted of wooden rocking horses, microphones and a drawing of Lauwers' own, executed in marble. The result was a distilled Shakespeare production, reduced to its essentials, and highly successful.

In his second Shakespeare production, Antonius und Cleopatra (1992), Lauwers concentrated on the character of Antony, torn between his passion for Cleopatra and his political aspirations.

Macbeth is sometimes said to be the bloodiest of Shakespeare's tragedies. And blood is the thread running through this interpretation, together with the question of how a human can degenerate into an unscrupulous murderer. The main theme of the play is Macbeth's train of thought and the way it evolves. It would be a mistaken view to hold on to an historical interpretation, since Shakespeare's work is so rich and offers so many essential human elements, that Macbeth's central themes can be used as a means of initiating a contemporary quest for the good and the evil in man and what these concepts currently signify.

On this subject Jan Lauwers says, "It would be a historical lie if one were to take the story literally. In reality Macbeth was a good and virtuous king whose reign comprised fifteen years of peace. So the story is not the main thing, theatre is about the feeling one perceives on the evening itself. That is the fine and fragile thing about the theatre as a medium. In art, everything has already been told, and what remains is feeling.

What we have tried to achieve with this, the umpteenth version of Macbeth, is to render Shakespeare's poetry. It is a language that's impossible to understand immediately. Even in England you see the majority of the audience following the play with the text in their hands. This is why it was our intention, rather, to create an overall feeling, to develop an artificial sense of time.

Seen in this way it becomes a radical play with a classical structure and a conservative use of language, averse to any modernization, because I believe that art cannot and should not ever be topical. One could make a Saddam Hussein of Macbeth, but then you enter into an anecdotalism that harms the extra worth that Shakespeare put into it."

The whole play is dominated by ambiguity. Foul is fair, and fair is foul, the witches say at the beginning, and that is only one example of 'what there is or what you see, is at the same time not there, or not seen'.

The story is sufficiently familiar. Macbeth and Banquo, who put down an uprising against their Scottish king, Duncan, encounter witches who foretell that Macbeth and Banquo's descendants will possess the kingship. For this reason Macbeth, urged on by Lady Macbeth, murders his king and a number of his servants when they are staying the night in his castle. The king's son, Malcolm, flees. Macbeth shifts suspicion onto them and assumes the kingship himself. He then hires assassins to kill Banquo and his son. The son escapes, but Banquo is killed. But it is Macbeth and Macbeth alone who sees Banquo's ghost appear at a feast, which is thereby disrupted by his unusual behaviour.

Macbeth then sees to the slaughter of the family of Macduff, who had joined with Malcolm in England, the latter now advancing with an army. Macbeth loses support.

Lady Macbeth, tormented by remorse, sleepwalks and vainly tries to wash from her hands the imagined blood still staining them. She meets her end in madness and suicide.

Macbeth puts his faith in yet more of the witches' predictions, but he interprets them wrongly.

The play Macbeth was first published in 1623 in the so-called 'First Folio', a collection of all of Shakespeare's plays except Pericles. The English text currently in the bookshops is the result of many years of meticulous editing, whose intention has been to clarify the text and to keep it readable even for today.

Macbeth was first performed in 1606, probably for King James I himself. In addition to this there is also an complete eye-witness account of a performance in 1611. As from 1663, song and dance were added in accordance with the sprit of the times, and this radically changed version remained in existence until the 19th century.

In the second half of this century, adapted versions of Macbeth have been performed regularly, and film versions have been made by Roman Polanski, Akira Kurosawa and Orson Welles.

Needcompany is a Cultural Ambassador of Flanders.