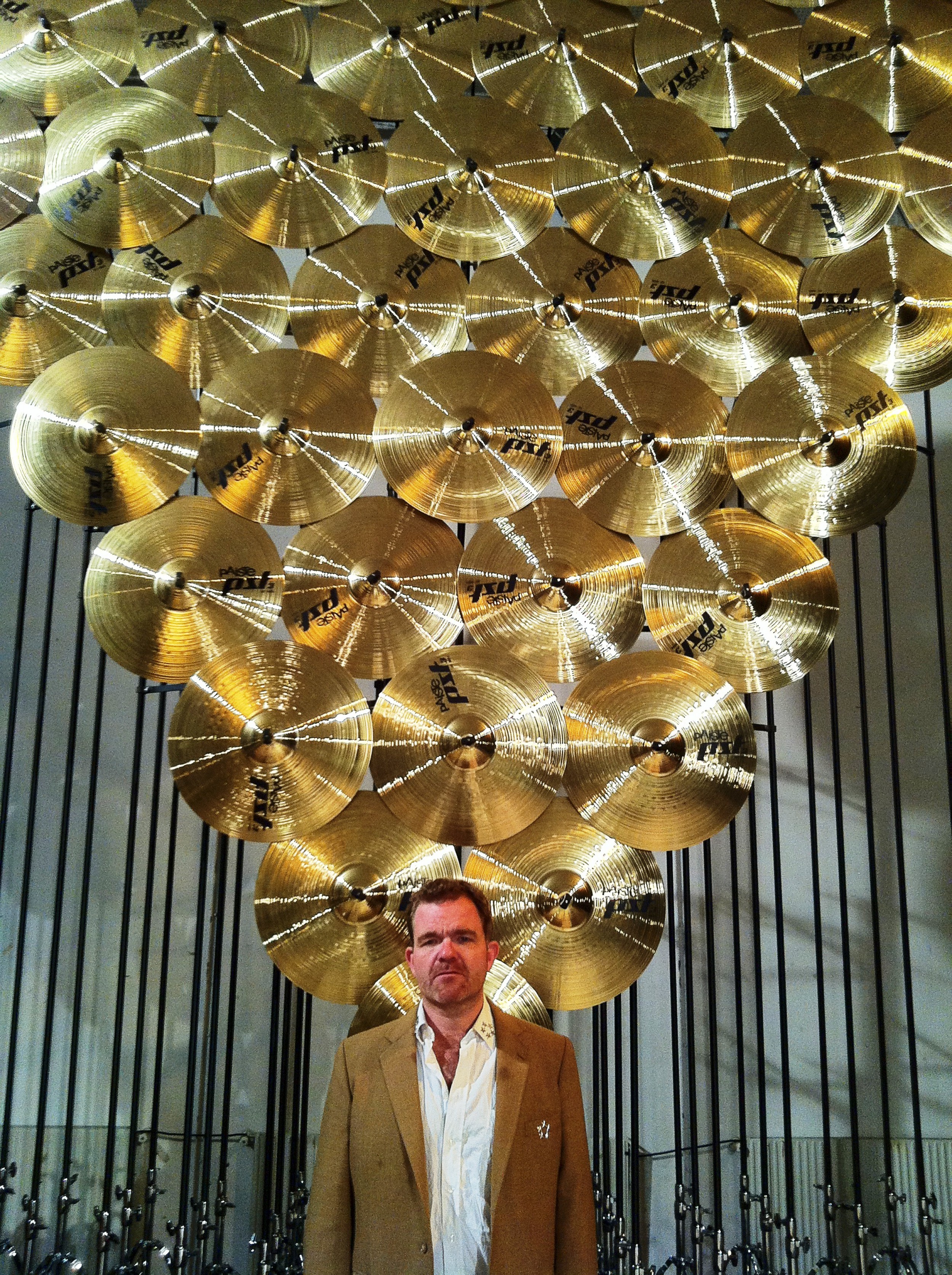 A Burgtheater production in cooperation with Needcompany. 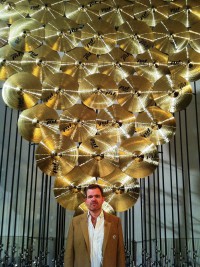 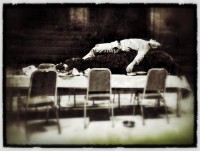 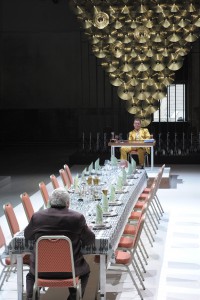 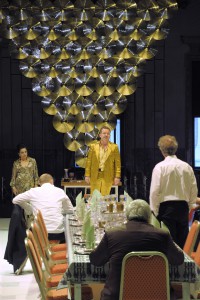 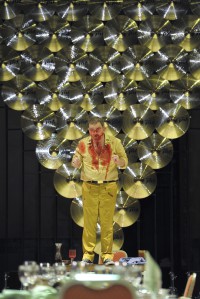 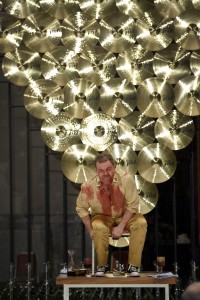 And what's the use to me of a firm hand, what use is the amazing power that's mine, if I can't have the sun set in the east, if I can't reduce the sum of suffering and make an end of death?
- Caligula in Albert Camus’ play Caligula

The Dark Side of the Moon

An interview with Jan Lauwers, by Florian Hirsch.

Caligula was written during World War II, in an apocalyptic historical context. Why is the play still relevant today?

There are two versions of the play. Our version was written during World War II. Due to his war experience Camus changed his opinion. He made Caligula more radical. The first version is more psychological. It’s a little weird for a philosopher to change his perspective when he sees a war, because there always have been wars. But I can imagine when you’re right in the middle of it that you might alter your opinion about human beings radically. Like Adorno, Benjamin and many other philosophers. Thinking: maybe you cannot create art anymore, things like that. But why is the play still relevant today? It’s very simple: Since World War II there have been more than 850 wars on our planet. Nobody realizes that. Once I did a performance quoting those 850 wars. So even though the Second World War was so incredibly monstrous and big and everyone said afterwards: Let’s not do this anymore. The result: 850 wars. War is part of our civilisation, our human behaviour. A text about a dictator is very significant today, I think, considering what is happening in the world. War on terror, fundamentalism, the financial crisis … I have the feeling that in the last years things have been changing radically. From the moment the Twin Towers collapsed in New York to the financial crisis of 2008 and the revolutions in Africa … Everybody is feeling very uncomfortable. And if there’s a very uncomfortable situation you’ll see that people are longing for dictators. In Greece, for example, I wouldn’t be surprised if a dictator came into power tomorrow. So we have to talk about that situation.

The second reason “Caligula” is still relevant today is even simpler: it’s a wonderful text. The part of Caligula is a gift for an actor. I’m very happy that I can do the play with Cornelius Obonya, since together we’re going very far in the analysis of this man’s behaviour and the way Camus wrote this tragedy along the lines of his idea of Absurdism.

People die, and they are not happy.

Yes, how can we deal with that? That’s a highly contemporary question, politically, culturally, religiously – the longing for strong religions and dictators. You know what’s so impressing about this text set in the Roman Empire? It’s as if they were talking about our society. Incest, political corruption, child abuse, you name it. Everything Caligula does one understands. One knows that these things actually happen. So the political message would be: Be aware of that. It may very well be the most political play I have directed in 25 years.

Camus himself described the story of Caligula as the story a “superior suicide.”

Well, that’s maybe Caligula’s ambition. But you could also describe the story as the impossibility of a superior suicide. Caligula’s last words are, in fact: “I’m still alive.” I think it’s difficult to decode what Camus wanted to state philosophically. I think it’s more metaphorical. And it’s more about humanity as such than one individual person. Don’t you agree?

Yes, in that final moment there’s also a dawning realization that the kind of unlimited, barbaric freedom he chose for himself simply doesn’t work out. It’s the wrong kind of freedom. Because you can’t be free against the rest of the world, without the others.

I think that’s the key to the play. Freedom without any social responsibility is pure horror. The more freedom you have, the more responsibility there is. I believe in total artistic freedom. But the higher you reach, the higher your responsibility. The higher you’re on the social pyramid, the more dangerous it gets. Power is always corrupting. It provokes something you can’t escape. You can’t even really blame Caligula for his deeds. You can’t even blame Dominique Strauss-Kahn for what he’s done. Absolute power at some point leads to absolute misjudgement. These people don’t even realize how they are abusing their power as well as other people. Power has corrupted their minds. A human being can’t cope with that. And we’re not only talking about Napoleon here but about daily life. Power is extremely present in all situations, on all levels of human society.

Are you, as an artist, sometimes longing for the moon? Are you struggling for the impossible?

And working as artist-in-residence at Burgtheater, coming from an entirely different theatrical tradition such as performance art, what’s that like?

The system Burgtheater is very solid. And it’s based on reproduction. Actors have to reproduce the same show all the time, using their craftsmanship to survive. They’re trained in reproduction. The opposite, on the other hand, is production. That’s performance art. It’s something you cannot reproduce. Theatre is reproduction. Performance is production. Coming from performance art I’m trying to find the connection with theatre by using the experience of production in this system of reproduction. As for me, the best moments of “Caligula” are those when one gets the impression that everything is improvisation. The moment the actors feel so free that you think they’re creating everything that very moment. That you feel a tremendous longing for freedom on stage. You destroy the Fourth wall and have an immediate connection with the public.

It seems like you often deliberately shift the focus of attention on stage.

Apart from reproduction vs. production I developed during the years what I call the “off-center"-strategy. It’s very simple: In a conventional play the center is identical with the focus. Off-center means: no focus. So if you have a center and an off-center on stage and you equalize the two, create a new balance, the off-center becomes as important as the center, and the audience can choose whether they want to follow the two, three, four or even five centers at the same time. It’s a whole new level of association. In “Caligula” I put a character on stage that originally isn’t in the play: Octavia, played by Anneke Bonnema, who’s the off-center, who tells the whole story without really saying anything. It’s all about energy. Art is energy. Art is freedom. And art is communication. And I hope we can bring those three elements together in this beautiful place called Kasino am Schwarzenbergplatz.

A Burgtheater production in cooperation with Needcompany.

Tour dates
> Show previous dates
< Hide previous dates
Reviews
Albert Camus’ Caligula is a fascinating, breathtaking theatrical opera
Die Presse (18 May 2012)
A madman at the controls of power
Wiener Zeitung (1 May 2012)
Roman madness: Caligula at the Burgtheater’s Kasino Salzburger Nachrichten
Salzburger Nachrichten (-- May 2012)
A butcher’s block for humans, with schnitzel and salad – an intelligent deconstruction: Camus’ Caligula at the Kasino
Der Standard (-- May 2012)
NEEDCOMPANY  |  info@needcompany.org  |  Privacy  |  Pro area
Website by Wies Hermans (Fuut)
This site uses cookies. By continuing to browse the site, you are agreeing to our cookies policy.